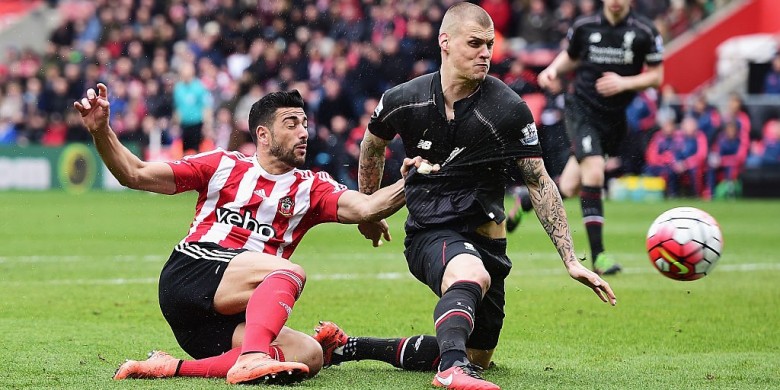 We bloody love a good moan.

A good moan and someone to blame. That always tends to make us feel better. Pass the buck. Somebody else’s fault.

In case you were wondering, Sunday was all Martin Skrtel’s fault.

His fault Liverpool capitulated from 2-0 up to contrive to defeat at Southampton.

At least if you read social media that’s pretty much the gist.

Get rid. Rubbish him.

Mind you, these are the same warriors that defended every mistake Mamadou Sakho made (and there were a lot) for a good 10 games because “he was coming back from injury”.

I wrote a fairly diplomatic piece on the Frenchman a little while back (I should really write more often than every three months). Admittedly, I was trying to be just that; diplomatic. The truth is Sakho was consistently shit. His form has improved of late but it can’t escape how exceptionally bad he was for a prolonged period following his return to the team.

Watford away, West Ham away, Norwich away, Leicester away, Sunderland at home, the list goes on. It’s a long list. A long list of shit performances littered with mistakes*.

Yet, the perception is that he’s excused because he’s returning from injury (long return that).

Skrtel, on the other hand, thrown on at half time against Southampton, is ridiculed. No mention of it being his first return to the team since injury, of course.

Indeed, no mention of the fact Sakho was beaten three times for the Saints’ goals. No mention of Simon Mignolet ballooning a clearance up into the air. No mention of Jurgen Klopp (who can’t seemingly do wrong) taking off one centre back for another at half-time in a match you’re in complete control of.

Surely, there are other factors to consider in Liverpool’s paltry surrender at St. Mary’s?

But, remember, people love to moan. They love to blame someone. That someone happens to be Martin Skrtel right now.

Skrtel, the man who has served Liverpool since 2008, under five different managers (all of whom have consistently picked the Slovak).

Skrtel, the man who Manchester City were prepared to pay £20m for in 2012.

Skrtel, the defender who defends more competently that any other defender at the club currently.

Skrtel, the player who’s is pretty much Liverpool’s only aerial threat from a set play and has notched memorable and important goals against the likes of Manchester City (2014) and Cardiff City (2012).

It’s crazy and bewildering how anyone with that profile remains a scapegoat figure.

More so when you take into context how measly Liverpool’s other options in defence are – and, particularly, how consistently inconsistent they have proved (Sakho, Dejan Lovren, Kolo Toure have all had lots of lows and little highs).

Skrtel is far from perfect. But neither are Liverpool. Neither is Klopp. Neither are many of the players currently in possession of a Red shirt.

To lay blame on a player with an eight-year Liverpool career behind him seems short-sighted and lazy. But that’s what social media does. It’s reactionary.

It’s a platform to moan. And remember, we love to moan.

EDIT: A very fair and balanced article on Skrtel and Liverpool by Kristian Walsh, worth a read here:  http://www.liverpoolecho.co.uk/sport/football/football-news/liverpool-fc-should-martin-skrtel-11075666

Behind the Fist-Pumping: Has Klopp been a success?